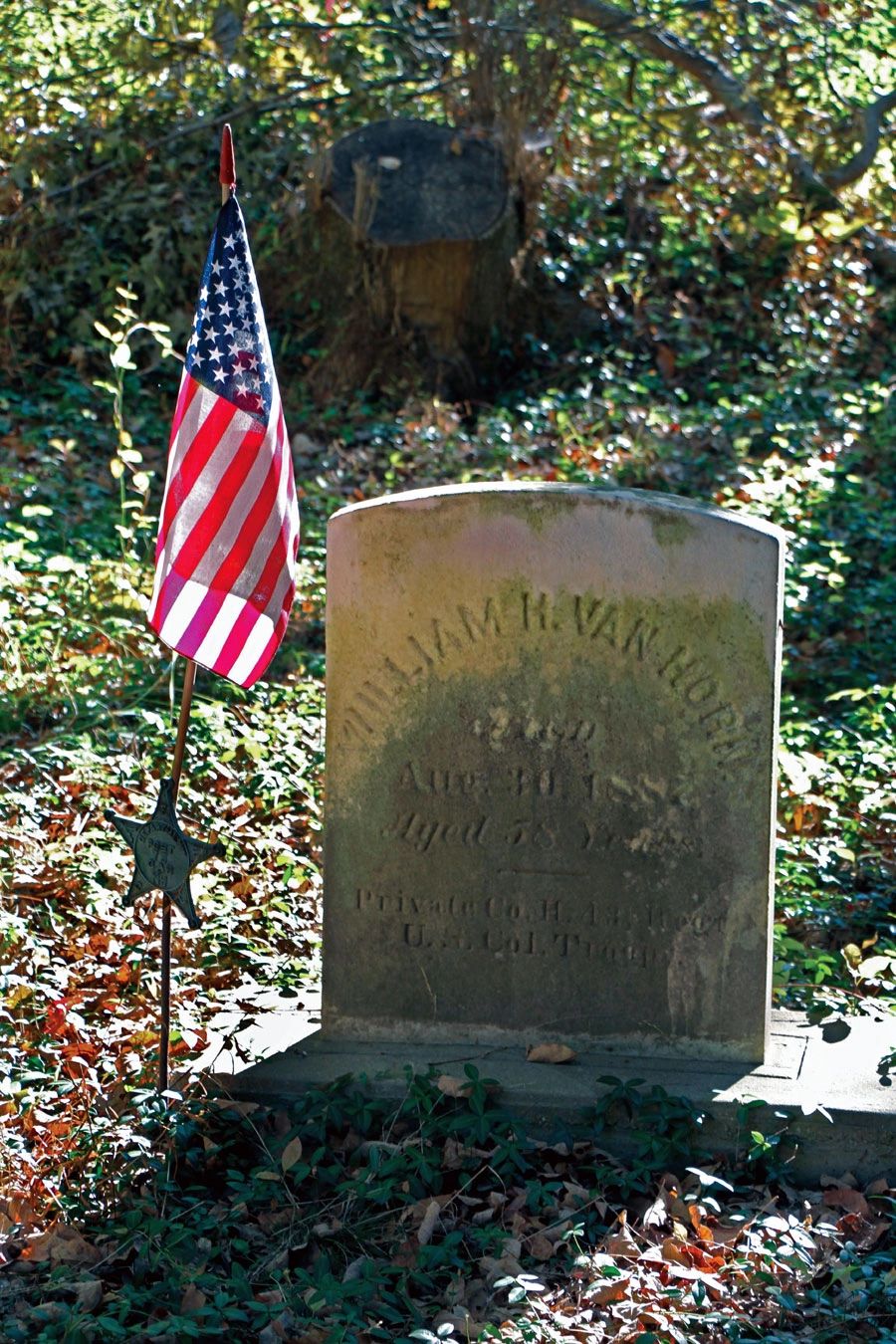 Disease, exposure, crippling accidents and battlefield wounds – during a 16-month tour of duty, Private William Van Horn of the U.S. Colored Troops suffered every hazard known to a Civil War soldier and carried his scars home to Lamington, New Jersey.

Spending his time in the Wyoming Valley of Pennsylvania and German Valley (now Long Valley), New Jersey during the early years of the war, William Van Horn was in his mid-thirties and a free black man when he joined the Union Army on May 9, 1864. Assigned to Company H of the newly organized 43rd regiment of the US Colored Troops, he saw his first major action less than three months later.

Since mid-June, the Union Army’s campaign to capture the Confederate capitol of Richmond, Virginia, had ground to a halt around the defenses of Petersburg, a vital railroad center 24 miles south of the city. Both sides were locked in a bitter siege that foreshadowed the type of grim trench warfare later seen on the fields of World War One.

In an effort to break through the Confederate lines, a Lt. Colonel named Henry Pleasants devised a daring plan. He had overheard a man in his regiment, one of the many Pennsylvania coal miners in his command, brag that he could blow up an enemy position by tunneling underneath it. Pleasants brought the plan to his commander, Major General Ambrose Burnside, who secured permission from the commander of the Union forces, Lt. Gen. Ulysses S. Grant, to give it a try.

In just over a month, the coal miners made good on their boast and dug a 600-foot tunnel that led directly underneath a section of the Confederate defensive works. Here, they packed two galleries with 8,000 pounds of explosives and waited to light the fuse.

The plan called for an attack to be made through the gap in the enemy’s line that would be created by the explosion, and William Van Horn and the 43rd Regiment were part of an all-black division that was chosen to spearhead the assault. The division spent a week before the detonation rehearsing the plan of attack until each man knew exactly what to do – which was to move quickly after the mine exploded, sweep around the crater caused by the explosion, and attack the enemy flanks to widen the gap in the enemy line. The all-black division was to be followed by three white divisions, which would move unopposed to the high ground behind the demolished trenches, leaving a clear road to Richmond.

On the eve of the assault however, Grant made what would turn out to be a fatal decision. He ordered Burnside to replace the all-black division with one of the white divisions, none of which had rehearsed for the initial attack. Grant would later claim that he didn’t want to be exposed to criticism for placing the black troops at the head of a dangerous mission, if the attack should fail. A despondent Burnside chose the replacement division by drawing straws.

At 4:45 a.m. on July 30, the four tons of powder were detonated and an awesome explosion tore a hole 170 feet long, 80 feet wide, and 30 feet deep in the Confederate earthworks. Nine companies of rebel soldiers were hurled into the air – 300 of them were instantly killed, maimed, or buried alive. Confederate troops on either side of the maelstrom fled their lines in panic and left a 400-yard gap in their defenses.

After stopping to gaze in awe at the mammoth hole and house-sized clods rent from the earth, the lead Union division, whose commander was hiding in a bombproof swigging rum, finally attacked. But instead of fanning out around the rim and attacking the enemy flanks, as the black division had rehearsed, they plunged into the crater. Burnside sent in the two remaining white divisions to follow up the initial attack, but like the lead division, they also charged into the crater. When the black division was finally ordered in, they advanced in good order, chanting “We look like men a-marching on, we look like men of war!” They swung around the crater to attack the enemy flanks, just as they had rehearsed, but it was too late.

By this time, the Confederates had regrouped and counterattacked, sealing the hole in their line and pouring a deadly fire down into the divisions that sat like fish in a barrel at the bottom of the crater.

The black troops, including the 43rd Regiment, fought gallantly, losing a third of their men to galling artillery and infantry fire that raked their front and flanks, until they were finally forced to withdraw. Confederate soldiers, outraged at the sight of colored troops, killed many of the black soldiers that were left behind and tried to surrender.

All ensuing attacks were cancelled and Burnside was ordered to withdraw his men, a move that was accomplished, but easier said than done. In the end, the Union lost almost 4,000 men and the Battle of the Crater went down as one of the worse managed battles and greatest missed opportunities of the war. The 43rd Regiment lost 123 men at the Crater. William Van Horn emerged from the fight unscathed, but unfortunately his luck would not hold out much longer.

From August 18-21, the 43rd was involved in operations against the Weldon Railroad, which linked Petersburg to North Carolina. William Van Horn was building log breastworks to bolster the Union line when he slipped and fell, severely injuring his back and causing kidney problems that would chronically plague him.

By late September, he was back on his feet and during the next month, the 43rd participated in operations at Poplar Grove Church, Boydton Plank Road, and Hatcher’s Run. While on picket duty near Fort Harrison Van Horn was shot through the left groin area, the bullet passing through his thigh and entering his other leg. Left with a permanent limp, he recovered and soldiered on, returning to duty with the 43rd, who were occupying a peninsula between the James and Appomattox Rivers in Virginia, known as the Bermuda Hundred. Here, sometime during the cold, wet winter in February 1865, Van Horn suffered crippling frostbite to both feet, battled a severe cold, and developed a bout of “scurvy” that left him blind in his right eye.

The 43rd continued to participate in operations that led to Robert E. Lee’s eventual surrender at Appomattox Courthouse on April 9, 1865. In June, the 43rd regiment was transferred to the department of Texas and served on the Rio Grande, opposite Mattamoras, Mexico. Van Horn was treated for scurvy again, but amazingly continued to serve until he was discharged on November 30, 1865 in Philadelphia.

William Van Horn went home to the Wyoming Valley in Pennsylvania for a few years, before returning to New Jersey, where he resided in Bound Brook for a few months before settling in the Lamington area of Bedminster Township, in Somerset County. William found work as a farm hand and married Annie Wortman at a service performed by the Reverend P.M. Doolittle, pastor of the Reformed Dutch Church at North Branch.

Van Horn carried the physical reminders of the war for the rest of his life, which eventually left him “unable to do half the work of an able bodied man.” In addition to the wounds and sicknesses reported in his war record, a later examination by Dr. J. Beekman uncovered a “severe injury on the back of the head near the base of the brain.” William stated that the scar was caused by a sabre cut he received during one of the battles. It may have been the cause of the epileptic seizure that claimed his life on August 30, 1887 at the age of 58. William Van Horn is buried in the Lamington Black Cemetery. On Cowperthwaite Road, in Lamington.

Wooded and serene, simple white crosses and weathered stones mark some of the graves of former slaves and free blacks at The Lamington Black Cemetery, while others lay beneath uninscribed fieldstones or are only identified by tell-tale depressions in the earth. Among the 97 verified sites, which include five veterans of the Civil War, it is believed that Cuffy Barnet, a lay preacher in the Bedminster African American community, known as “The Lamington Black Saint,” is buried in one of the 63 graves of the unknown. Cuffy and his wife Amber, were the slaves of Dr. Oliver Barnet, a physician in nearby Oldwick, and were freed in 1825, after Barnet’s widow’s death. It’s likely that Cuffy presided over many of the burials at the Lamington Black Cemetery as, according to Volume 8, of The Somerset Historical Quarterly (1919), Cuffy “generally attended all funerals of his own race in the Lamington neighborhood and, when no ordained minister was present, he offered appropriate prayer at the grave.” All but abandoned and forgotten over time, the cemetery was rediscovered in the late 1990s and a community restoration project eventually led to its placement on the National Register of Historic Places and a rededication in 2001, which included a 21-gun salute by an Army Honor Guard and culminated in a lone bugler playing “Taps” over the graves of the Union Veterans of the Civil War.